He’s always there, but seems to be hovering in the background. He humbly looks upon the baby in the manger, giving plenty of space to the shepherds and the misplaced wise men (who, although not actually there on the night of Jesus’ birth, seem to dominate many manger scenes with their rich garb and gifts).

In this scene, Mary often shines with the post-pregnancy glow that’s reserved for movie stars and the mother of Jesus. But Joseph seems to be taking it all in, struggling to grasp the full import of what just transpired. God entered our time and space . . . as a baby. Joseph, in one fell swoop, becomes a father. Not of a child of his own flesh and blood, but of a son with whom God his Father entrusted him. I don’t think we pause often enough to think about what a crazy year Joseph just had and how remarkable was his trust and obedience in the Lord’s promises.

Let’s recall Joseph’s story—he is a carpenter from Nazareth, most likely several years older than Mary, to whom he is engaged to be married. Engagement in those days was much more serious and binding than it is today, requiring a divorce rather than just the return of a pretty ring. Then Joseph finds out that Mary is pregnant, and the fact that it could be immaculate conception doesn’t really cross his mind. How hurt he must have been, thinking of his bride with another man, an offense that, in those days, was punishable by stoning. Joseph had every right to make a public disgrace out of Mary, to clear his own name and save his goat for another gal. Instead Joseph shows his mettle by deciding to divorce her quietly, the best he can think to do for Mary and her reputation. But then comes an unlikely visitor.

“But after he had considered this, an angel of the Lord appeared to him in a dream and said, ‘Joseph son of David, do not be afraid to take Mary home as your wife, because what is conceived in her is from the Holy Spirit. She will give birth to a son, and you are to give him the name Jesus, because he is will save his people from their sins.’ When Joseph woke up, he did what the angel of the Lord had commanded him and took Mary home as his wife. But he did not consummate their marriage until she gave birth to a son. And he gave him the name Jesus” (Matthew 1:20,21,24,25).

Did you catch those last verses? As soon as Joseph woke up, he did what the Lord commanded and took Mary home as his wife, despite the consequences. Not only that, but he kept Mary pure (did not have sex with his own wife) until after Jesus was born, which is a point often skimmed over but which speaks a great deal to Joseph’s character. There would be more angel visits for Joseph, and every time he obeyed the Lord. He protected his wife and son, provided for them, and cared for the baby who would grow up to save all of us from sin. In short, Joseph could have worn a “World’s Greatest Dad” tool belt in his woodworking shop. God chose Jesus’ earthly father just as carefully as he chose Mary.

Two thousand years later, we often view the Christmas story in a tidy package . . . a nice little jaunt to picturesque Bethlehem, the gentle animals watching over baby Jesus in the quaint cozy stable. Our nativity scenes on our mantles are great, but sometimes we forget that this was real life, that Joseph and Mary were real people with real problems and emotions, going through really tough stuff. They dealt with ridicule and shame, poverty and hardships. They had to travel to Bethlehem under a government jurisdiction right about the time they should have been packing the hospital bag for Mary and finishing up What to Expect When You’re Expecting the Savior. They had to flee to Egypt to escape a crazy king who wanted to kill their baby boy. As Joseph and Mary had more kids, they had to refrain from comparing them to Jesus all the time (“Come on, James and Jude—what would Jesus do?”). Most important, they had to raise their son knowing that he would be taken from them too soon, that the sins of the world would be laid upon his shoulders on that cross on Calvary. 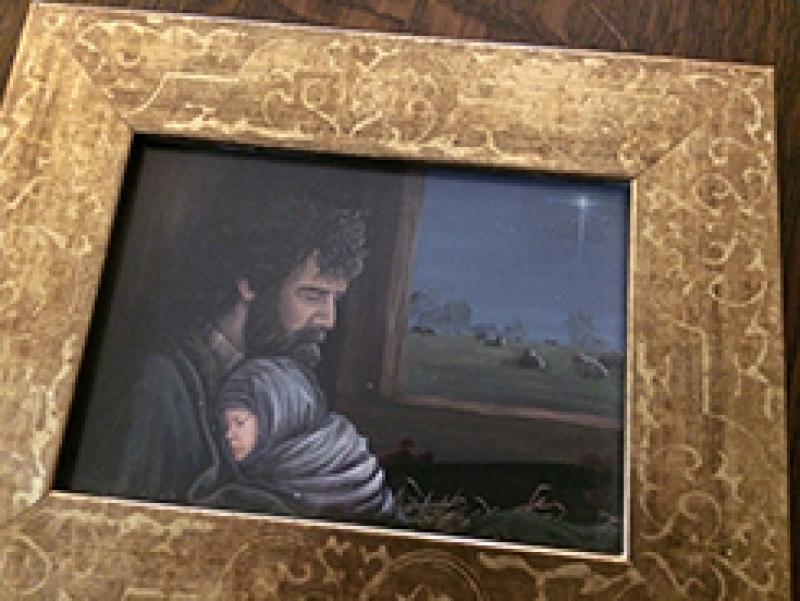 I have a framed picture that lives in our Christmas decorations, and it is of Joseph holding the baby Jesus. No shepherds. No quadrupeds. No wise men. Not even Mary (let’s assume she’s off pondering things in her heart or taking a much-needed nap post-delivery). No, the picture is just Joseph, having a quiet moment with his newborn son. That picture was given to me by my mother-in-law, who has really enjoyed watching her own son become a great dad for her grandchildren. Oh, the love we have for those the Lord has entrusted to us. Oh, the love Joseph felt for the son that the Lord had entrusted to him. Way to go, Joseph. Way to go, God.

The risen Lord Jesus gave an extraordinary gift to two disciples from his wider acquaintance, to a man named Cleopas and his friend. Without…

Our daughter was coming up the driveway when my husband made the universal signal for “roll down your window.” (You know, the crank-your-arm-in-a-circular-motion signal.)…

There’s nothing quite like having someone’s full attention. They’re present. They’re listening. They have their phone put away, and their eyes are focused on…

Missy lives in Green Bay, Wisconsin, with her husband, Jon, where they own and run Copper State Brewing Company. She homeschools their four active children, oftentimes at the brewery, and they somehow keep learning in spite of her. Missy loves witty banter, adventures of all sorts, and coffee . . . lots of coffee. And Jesus . . . lots of Jesus.